Rapt attention and the law of unintended consequences

As I have already mentioned, I am transplanted from the East Coast.

As such, I was used to a lot of greenery and wildlife around me.  Growing up in New York and New Jersey, we had miles and miles of solid trees of every kind and all the yard animals that go along with it, birds native to the Northeast, squirrels of course, the occasional skunk, possum, raccoon, etc.  Insects like butterflies, mosquitoes, you get the idea.

Moving to Valencia, I had to learn to get used to the chaparral, Sunset’s zone 18.  It is a fairly inhospitable climate – extremely hot and dry, high elevation, beset by desert-like Santa Ana winds on a regular basis.  Wildfire country, I came to learn.  In fact I spent one of my most nerve-racking days a few years back watching a fire spread on a distant hill, thinking it might somehow make its way to us and I would see a lifetime’s worth of stuff disappear in a puff of hot smoke (I was later assured, we were in a non-fire zone, but I am the nervous type to begin with).

Anyway, I decided I was going to recreate the verdant zone I grew up in, around me in this house, which I had picked because it was on the arroyo side of the neighborhood and already had quite a number of giant, mature trees.  All I had to do was fill in the rest. Dozens and dozens of plants later (which all had to be irrigated – a story in itself for another time), I was comfortably ensconced in my oasis.  Among all these flowering and fruiting trees and bushes, I made sure I included those that would attract song birds, butterflies, frogs (I had hoped), bees, and lady bugs. 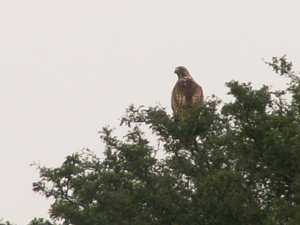 What I didn’t think about was that it also attracted snakes, squirrels (they are pests when you have fruits and vegetables!), field mice and predatory birds like owls, falcons, hawks, and crows.

Yup, I have all of those now because in my attempt to make a wildlife haven by design, I forgot that I was providing food for a whole different category of animal.

So, every morning and every afternoon, we have to throw the windows open (goodbye AC) and be on the alert, especially for raptors.  Not only does all the greenery come with high maintenance that we do ourselves as the blow-and-go guys that are the neighborhood ‘gardeners’ wouldn’t have a clue as to how to maintain our yard, but I am on constant yard watch against a wide variety of varmints.  To date, we have personally escorted almost 70 squirrels, in a large cage, to the arroyo, along with dozens of mice, in a smaller cage that have to be kept clean and baited at all times.  Did I mention I am also a composter and have a bin of Australian red worms for castings and worm tea fertilizer?  That is a tale in itself.  I am not high maintenance enough all on my own by dint of personality, I created another whole layer of upkeep by virtue of this obsession to carry my old environment around with me like a snail.

This type of self-inflicted garden slavery was never in my calculus and I sure don’t remember it being an issue back East, growing up.  I cannot decide whether it was that I was just oblivious then (probably) or somehow nasty animals never ventured into our yard there because they had too many other safer, more convenient dining spots to choose from.

What I am trying to do here is discourage these intruders to the point that they simply move on to the large and well stock arroyo a stone’s throw from our house, where they would have provisions in abundance.  I have successfully trained the crows and condors to skirt our address, but the falcons are another matter.  Yesterday, there was an audible skirmish in the back and when I ran out, my pan and stick ready for driving whatever it was away, I finally spied a huge brown raptor, sitting ever so still like a big brown knot, in our rear pepper tree.  I had to climb from our table to the top of the stone wall, up into that tree and bang on the branch he chose, until, with one huge silent swoop, he flew up and away.

I was exhausted and had to laugh to myself, as the words of the elderly retired engineer across the street came back to mind.  When he saw us hauling in all the trees and bushes, like the tyros we are, he just shook his head and muttered, ‘You’ll be sorry’.

4 Comments on “Rapt attention and the law of unintended consequences”